Review of How to Run Your Business Like a Girl 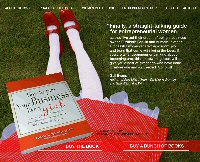 Back in December I promised a review of How to Run Your Business Like a Girl, by Elizabeth Cogswell Baskin, which I bought because I do judge books by their cover. And web site. (I know, I know…)

How to Run Your Business Like a Girl is an easy read. Most of the content is delivered in the form of interleaved stories about three featured entrepreneurs, well-chosen to represent the many different types and sizes of businesses women start and run. The rest of the book consists of interviews with other female entrepreneurs.

I did not get any startling insights into female entrepreneurship. Women trust their intuition, are good at relationships, and value work-life balance. But I knew that. The book does a better job delivering on its subtitle: Successful Strategies from Entrepreneurial Women Who Made It Happen. Fortunately (for me, as a male reader) those stories and strategies are useful for everyone considering entrepreneurship.

How to Run Your Business Like a Girl does a great job of de-mystifying entrepreneurship. The many examples of women running the business and life they want, rather than following some classic plan for all-consuming-business-growth, are encouraging and inspiring. The emphasis on relationships and life balance may reflect feminine priorities, but they are topics every entrepreneur, male and female, should be thinking about.

You Need to Be a Little Crazy

You Need to Be a Little Crazy, Barry Moltz's book on "the truth about starting and growing your business," paints a picture of small business that is not the one I see in my mind.

Barry and I both started our full-time entrepreneurial adventures in 1991, but we have traveled very different roads. I am still building the business I started that year. Despite dramatic ups and downs, I see entrepreneurship as a process of learning and growing and refining. Barry has started and exited three businesses in that time, with a failure, a departure, and a sale. I get the feeling that he sees entrepreneurship as Mr. Toad’s Wild Ride.

The value of Barry's book, however, is that picture it paints of small business. Because his picture is reality for many entrepreneurs: it can be a wild ride. You will be tossed around. You may be thrown past the safety bar and fall screaming through the air. And Barry tells it as it is, with a candor that is refreshing, at times unsettling, and always enlightening.

I am more than fourteen years into a business that is working. A small business, in my mind, is a going concern, and Fire Someone Today is for people who are in the game today. Barry has played the game several times and a few different ways. He focuses more on the costs, challenges, and emotions of starting up. You Need to Be a Little Crazy is a great book to read before deciding if entrepreneurship is a game you want to play, and it is full of encouragement and enthusiasm for those of us crazy enough to say yes. 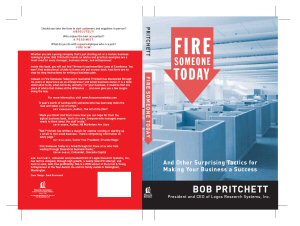 My publisher just emailed me the final cover art for Fire Someone Today. That is a lot of red ink! But it is great to see everything coming together and heading to the press.

I am thrilled with the generous quotes I got for the back cover, and the many others on the Reviews page.

Business and entrepreneurship bloggers, please let me know if you'd like to look at it for review, too. Just email me at bob@firesomeonetoday.com.

"The best way to get scholarly recognition [is] to publish something that's almost right but is just wrong enough to make people want to argue with you."

Google your prospects or lose them

I continue to be amazed that people will show up for a job interview not having visited our company web site. I don't want to hire anyone without the sense and initiative to read everything they can about the company they are interviewing with. Still, I can almost understand it when someone is interviewing for an entry level job. Maybe they do not have a computer at home. Maybe they couldn't get to the library this week. Maybe they know nothing about how the world works.

But when a salesperson calls to sell a business-to-business service and knows nothing about our company, I get upset. Not only are they wasting my time, they are wasting their time, their employer's resources, telecommunications bandwidth, oxygen, space on the planet earth...

This week a salesperson called to introduce her firm. Her firm helps small software companies by developing customer leads and contacts inside large companies. Apparently, you hire them to run your sales operation when you can't.

She was completely unaware that my company sells a consumer software product and doesn't sell into large companies at all. She told me (when I asked) that she had not visited our web site.

"We're not a potential client for you. But just a tip: it kind of hurts your credibility as a 'big-game-hunting' sales company if you don’t even visit a company’s web site before calling to sell your own services!" I screamed.

Okay, I didn't scream. I said it quietly and she thanked me for my time. I wanted to scream, though.

If you don’t visit the web site of every sales prospect and Google every contact, you don't deserve the sale.

Posted by Bob Pritchett at 9:46 AM | TrackBack 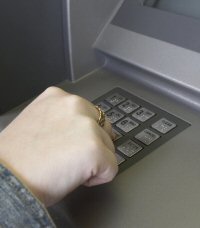 I lived in Philadelphia during college, and regularly used the ATM outside a nearby bank. It was a quiet location late at night, and I was always a bit wary when using the ATM. When word spread of a student being held up at that machine and forced to enter their PIN, I decided to get my cash elsewhere.

I also started thinking about ways to improve security. I came up with the idea of letting users enter their PIN number backwards. Without stopping the transaction, the ATM could silently summon police, mark the surveillance footage for review, etc.

I liked my little idea, and, being of an entrepreneurial bent, I gave some thought to what I could do with it. My conclusion: nothing.

(In response to proposed legislation, the State of Illinois came up with lots of other reasons this is a weak idea.)

Fortune Small Business has the story of Joseph Zingher, who came up with the PIN-number-backwards idea in 1994, patented it, and tried to turn it into a business. What did it get him? He is 47, broke, living with his brother, and ranting about the "brain-dead zombie" bankers he wishes were his customers. He has lowered the price for the first state to $0, and still has no takers. (Forbes has more on Zingher's quest.)

State legislatures may yet come to his rescue, but I still hurt (as a fellow-imaginer of the same idea) for Zingher and his wasted years. His idea is not a bad idea; it is just not a great idea. And more importantly, it is an idea the success of which can never be in his control: Zingher doesn't run a bank or manufacture ATM's.

Why Fire Someone Today

So far, Fire Someone Today is proving to be a great title for a book. It catches attention and generates interest.

The downside is that without a closer look it appears to some people to be a one-subject book about management through intimidation. It is not.

Of course, it is a lack of clear thinking that makes something a tough call in the first place. When we are thinking clearly the calls aren’t tough at all. More than 20 years ago Peter Drucker summed up the message of my first chapter more succinctly than I ever could:

“To keep misfits in jobs they cannot do is not being kind; it is being cruel.”*

A business acquaintance wanted to get my feedback on a project he is planning. His office is 90 miles away, in Seattle, but since I wanted to get to know him better I offered to stop by. And then I started emailing other contacts in the area.

In one day I visited six people in five offices. I drank a lot of coffee and shared a leisurely meal. I had productive meetings, met co-workers, toured facilities, and built friendships. I went home with new ideas for my business, a box of chocolates for my wife and some free products for my kids.

Chapter 16 of Fire Someone Today is titled Visit Everyone in Person. Going in person takes a lot of effort. It wastes time. But I have only regretted the visits I did not make.