Sign up to hear about future projects from Bob Pritchett.

"I've watched companies such as Microsoft and RealNetworks grow to be powers in the industry. I've also started two businesses myself. Bob's advice is direct, accurate and honest. Even Bill Gates would have appreciated a copy in his early years! It's no wonder Bob has built such a successful business for himself, one which combines his personal and professional passions."

Chapter 10: Profit Is Why You Are in Business

Everybody understands that businesses exist to make a profit. Profit is so much a part of how we understand our society that when an organization is set up for any other purpose we explicitly label it a "nonprofit" organization.

Maybe because it sounds greedy, small businesses in particular do not generally talk about profit. Instead they focus on their secondary purposes: to help individuals find the best life insurance at the lowest rates; to provide a worry-free roofing future; to bring the authentic taste of Chicago deep-dish pizza to Podunk, Wisconsin.

Unfortunately, many people get so wrapped up in the secondary purposes of their business that they lose sight of the primary purpose. I was one of them.

Profit Enables You to Pursue Your Other Goals

In the early days of my business, I was consumed with growth and with "the mission." We sell Bible software, so it was not difficult for me to see our work as something nobler than just making a profit. I believed that success meant providing our useful tool for Bible study to as many people in as many countries in as many languages as possible.

Business is about numbers, and I was a true devotee of the numbers. I tracked gross revenue, employee headcount, number of customers, countries served, and languages supported. I made decisions based on growing those numbers. A lower price will sell more units? Let's lower the price. A single customer asked for a Swedish version? Let's build a Swedish version.

It wasn't that I completely ignored profit. I checked in once in a while to see that we still had one. I just didn't worry too much about how big it was, and I did not take the time to find out exactly where it came from. In a high-growth business like ours, I reasoned, we were investing in the future, not trying to make money right now.

Rapid growth, some outside investment, and some very profitable projects held trouble at bay for a few years. But when it caught up with us it hit us hard: on sales of $4.6 million we managed to lose around $900,000. It had been our best year by every other measure. We had higher revenue, sold more units, and employed more people than ever before. We had simply failed to make a profit. In the months that followed, our continued losses threatened our survival. I began to realize that if we did not make profit the focus of our efforts I would have neither the luxury of pursuing our mission nor the convenience of a place to live.

Making a profit is what enables a business to accomplish its mission. Profit needs to be the first priority or you will not have a chance to pursue any others.

Around the time we reached this low point in our business, I attended a meeting of entrepreneurs. Introductions revealed that the man sitting next to me had a locally focused service business a fourth the size of mine. He did not have a quarter-million customers in 140 countries in a dozen languages, and he did not have ambitions to change the world. He did, however, have a consistent profit of 10%. His goals lacked the global scope of mine, but he was actually accomplishing his and making a positive impact locally. For all our size and ambition, the impact I was then most likely to make was an increase in local unemployment.

There Are Lots of Ways to Be Unprofitable

Our huge losses forced us to take a careful look at our business. We discovered that under my careful direction the company had successfully navigated into every major profitability trap:

The use of the word strategic should set off your alarms. In business it rarely refers to strategy anymore; it has become a code word that means "losing lots of money."

Everything You Do Should Be Profitable

Impending doom is a wonderful motivator. I had signed personal guarantees; if the business failed I would go down with it. Facing, at last, the prospect of personal ruin, I became obsessed with profitability. As an organization we attacked costs, promoted sales, and developed a powerful new decision-making system to help turn our business around: 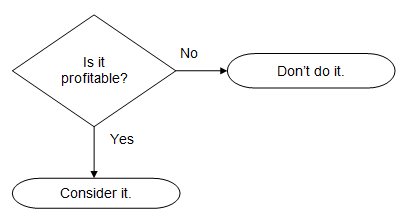 As you can see, the new system did not add too much complexity to our decision-making process. It was relatively simple to implement. It did, however, make a big difference in our business.

In one of the first applications of the new decision-making system, we evaluated the business prospects of a new piece of software we had developed. We were confident that there was a large market for it but realized that it was outside our core audience. We did not have access to the right customers nor the resources to establish ourselves in this new area.

We sold the software to another company that was already established in the new market. The deal was profitable for us and allowed us to stay focused on our primary product line. I was very proud of our newfound responsibility in finding a profitable alternative to an unprofitable foray into a new market.

A few weeks after the deal closed the buyer asked for some extra work from our programmer. Feeling good about the fact that we had made a profit on the deal I prepared an estimate based on our cost for the programmer's time. "It's still profitable," I told myself.

Then my internal alarm sounded. The software sale was a done deal. Contracting out the programmer's time was a new deal, and I was planning to do it at cost. In fact it would not be at cost, it would be at a loss, since I was not accounting for overhead or lost time on our own projects.

I doubled the quote for the programmer's time to ensure I covered all our overhead expenses. Then I doubled it again to make sure it was profitable. And then I rounded it up to a nice, even sum.

Few customers have the temerity to ask you to take their business at a loss. Most will at least give lip service to your need to make a profit. They would just like to define your profit as a positive number approximating zero.

Like an endless stream of new car buyers waving "actual dealer invoices," your customers will constantly attack your profit margin. They don't wish you ill, they just need a little discount, and surely, in your big fat profit margin you have room to move just a little bit, right?

Don't do it! Stand firm! You do not really want to join the car dealers in a world where every sale is a battle and customers worry that they got a worse deal than their neighbor, do you?

If your price is too high or your margin too fat, you will find out soon enough: you won't have any customers at all. If that is not the case and your price and profit are right, then you do not need to bend for any single customer. Making an exception to avoid losing one deal or one customer is like making one hole in a dam. It won't be long before your leak is a flood.

We regularly produced products on a contract basis for a much larger company. This company had rigid internal systems to ensure profitability. Their employees were virtual slaves to the spreadsheets; if a project did not hit the numbers, it did not happen.

As the small contractor, we had gotten into the habit of accommodating our customer. After all we were small and agile, and it was big and inflexible. We quoted each project based on our costs and profit margin. Costs were difficult to estimate perfectly but reflected our best guesses and actual experience. If it turned out that the project did not work on their spreadsheets, the customer's product manager would come to us, and we would squeeze our own numbers. Since we knew that the cost estimates were imperfect, we would reduce those estimates. We would be optimistic about the labor required and would even sacrifice some of our profit margin. We would do whatever it took to hit our customer's target numbers.

As I prepared to sign off on yet another adjustment—we had quoted around $42,500 for a project the customer had only budgeted $40,000 for—I pulled out a calculator. We were giving more than a 6% discount on the whole project. That didn't sound too bad, except when I realized that we were simply planning to do the same work for less money. The $2,500 was all coming out of profit where it represented a huge percentage if not the whole profit (depending on the actual final costs).

I said no and expected to lose the deal. Instead the customer simply struck $2,500 worth of work from the project scope and turned it into something that was profitable for both of us.

The spreadsheets which constrained decision making at our large customer's offices were not any better at precisely predicting sales than our spreadsheets were at precisely predicting labor costs. They could have nudged sales projections up as easily as we could have nudged cost projections down. But they had the discipline to respect their numbers in order to protect their profitability. That made it all the easier for them to respect us, working together to find another solution, when we began to show the same discipline.

Profit is the first mission of every business. It protects and enables all the others. Goals may inspire your business and cash may keep it alive, but if your business is not pursuing a profit it is not a business, it is a hobby. Or a money pit. Or a massive black hole that will absorb your time, effort, hopes, dreams, and financial future. Take your pick.

When we learned the importance of profit in my business, we not only changed our decision-making process, we changed our spreadsheets. We hardwired a minimum profit margin into every financial decision. Our budgets have a fixed-percentage profit allocated before any other costs; profit is the only unassailable line item.

In my personal finances over the years, poor planning or unexpected expenses have caused me at one time or another to be late paying a bill. I have never missed an income tax payment, though, because it is withdrawn from my paycheck before I receive it. Having the taxes set aside before the paycheck is drafted ensures their priority.

While we were learning the discipline of putting profit first, we used this same technique. We physically set aside our minimum profit margin from each day's sales out of that day's cash receipts. By immediately taking the profit out of our working cash, we protected it against erosion from unexpected expenses. We were forced to track sales and costs more closely and to be more careful in our planning because the funds allocated to profit were taken out of the equation. In the course of each year, our overall profit still varied but rarely below that set-aside minimum.

Profit can be defined as what is left of your revenue after you have covered your expenses. That is a risky definition for something that protects your business future and enables you to accomplish your business purposes. Define profit as the priority, not the leftovers. After all, profit is why you are in business.